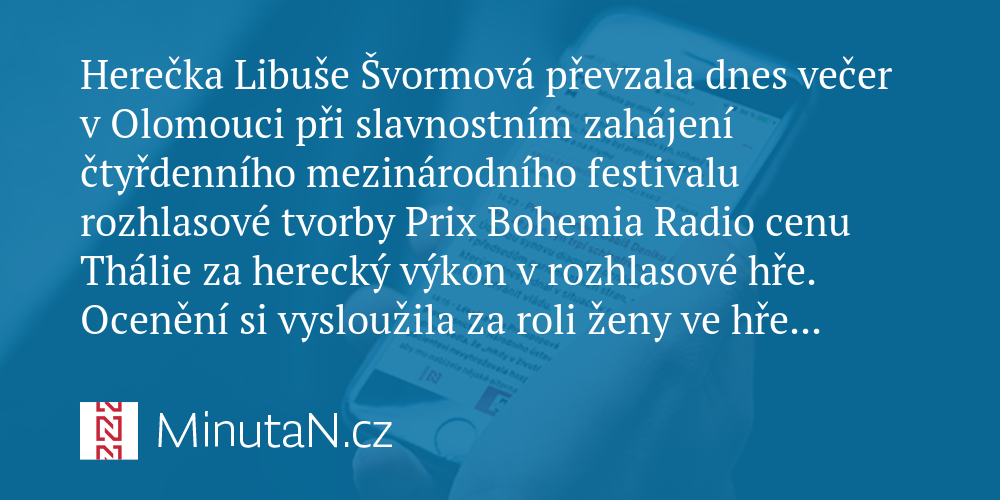 Actress Libuše Švormová received the Thalia Prize tonight in Olomouc at the opening ceremony of the four-day international radio production festival Prix Bohemia Radio for playing in a radio play. She won the award for her role as a woman in Children of Hell.

The International Radio Festival Prix Bohemia opened today in Olomouc by listening to six final radio programs in the documentary category. After the final documentaries, four Czech reports and eight foreign reports will be presented in Olomouc on Tuesday, five final works in the theater section on Wednesday and five finalists in the multimedia category on Thursday.

Until Thursday, in addition to listening to radio works, the festival will also offer theater, Café Potmě or topical podcast performances. We will remember the former honorary president of the festival Hana Maciuchová, whose role is taken over by Igor Bareš. Visitors will be able to remember the actress who died in January of this year on Tuesday between 3:00 p.m. and 4:00 p.m. at Café Potmě through excerpts from her radio work. On Wednesday, the festival schedule will focus on what’s new in podcast creation, which also includes the Digital Writer project. The Czech Radio Endowment Fund has prepared a night run for the firefly.

The festival will also showcase some of the services that radio typically offers to blind and visually impaired people, who constitute a large part of radio consumers. This is, for example, the Blind Fan project, in which Czech radio commentators comment on events that the blind person does not see directly in the stadium. Likewise, this procedure is repeated in culture, in Prague a performance of the Mana Theater offered such an opportunity, and in Olomouc at the festival it will be repeated for the Transky, body, seconds performance of the Petr Bezruč Theater. The award-winning performance by director Tomáš Dianiška is inspired by the story of Czechoslovakian athlete Zdena Koubková. (CTK)