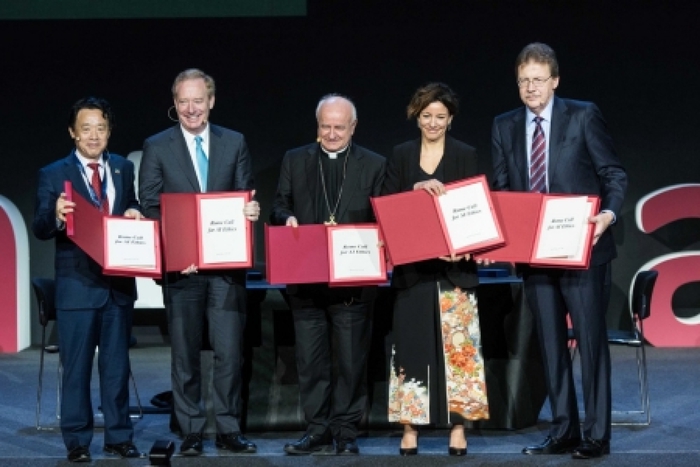 The Vatican has set up a Foundation that will deal with artificial intelligence and its implications. Accepting the request of the President of the Pontifical Academy for Life Monsignor Vincenzo Paglia, Pope Francis – with an ‘ex audientia’ rescript signed on April 16 by Cardinal Secretary of State Pietro Parolin – created the ‘renAIssance’ Foundation , with legal public canonical personality, based in the Vatican City State, at the same Academy for Life. The statute of the new body has already been approved.

“The Foundation was born following the ‘Rome Call for AI Ethics’, for an ethical approach to artificial intelligence, signed on February 28, 2020 by me, by the president of Microsoft, Brad Smith, by the executive vice president of IBM John Kelly III, by FAO Director General Qu Dongyu, and representing the Italian government by Minister of Innovation and Technology Paola Pisano, ”Bishop Vincenzo Paglia told ANSA.

“Its function – he continues – will be to disseminate this charter throughout the world, because we believe that faced with the invasion of this dimension in everyone’s life, it is important to reaffirm the common ethical, educational and legal framework of artificial intelligence. “.

“At the time of writing and signing the” Appeal “- remembers Mgr.

Paglia – we coined the term “algorithms”, because algorithms also need a moral dimension. What must be avoided is a dictatorship of these new technologies and that those who have “big data” do what they want with it. And we would not want technological development to take place outside of a humanist perspective “.

In this regard, the president of the Academy for Life gives the example of “facial recognition” technologies, with which “anyone’s life can be blocked”. And remember that “the initiative of the ‘Call’, and consequently also of the new Foundation, I started because two and a half years ago came to me the successor of Bill Gates, at the head of Microsoft of a company of 50,000 engineers, who told me: ‘We can do extraordinary things, but also terrible’, and asked me for ‘moral support’. ‘Are you ready to accompany us on this journey ? ‘he asked me.

Bishop Paglia also explains that “the Appeal does not belong to anyone in particular, but to the one who signs it”, and anticipates that “a meeting between Christians, Jews and Muslims is already planned to sign the Appeal”. The interfaith summit will take place in Abu Dhabi, currently scheduled for next October.

The Pontifical Academy for Life’s project of a new Foundation dealing with artificial intelligence has met with the full approval of Pope Francis, who is well aware and aware of the potential and risks associated with its developments and applications.

The Pontiff also dedicated his prayer intention to the subject last November, explaining – in the video released by the Pope’s Global Prayer Network – that “artificial intelligence is at the basis of the change of era we are living”. And he continued, “Robotics can make a better world possible if it is combined with the common good. Because if technological progress increases inequalities, it is not real progress ”.

François therefore indicated that “future progress must be oriented towards respect for the dignity of the person and of creation”. The suggested invocation was that humanity should not be lost sight of. Indeed, the Pope concluded: “Let us pray that the progress of robotics and artificial intelligence will always be at the service of human beings”, or rather “be human”.