Kladno confirmed the arrival of coach Vejvoda, Jágr will miss the start of the season 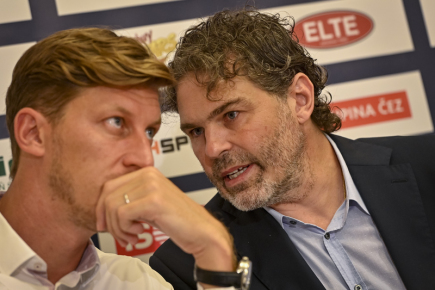 Kladno – Hockey Kladno has officially confirmed the hiring of Otakar Vejvoda Jr. as coach, where he will replace David Cermák, as well as Jiří Burgr and Miroslav Mach. The Knights also presented new reinforcements at the press conference: defender Ondřej Slováček from Finland’s Lukko Rauma and Latvian full-backs Oskars Cibulskis from Sweden’s Brynäs and Kristaps Sotnieks from Dinamo Riga. Game owner Jaromír Jágr is trying to keep going, but he says he won’t surrender at the start of the season.

Captain Tomáš Plekanec and gunner Adam Kubík continue to play offensively in the team after their contracts have been extended. It’s not yet clear when Jagr will join the game. “I haven’t done anything, I haven’t trained for three months. I don’t know if I’ll be able to get back into hockey rhythm right now. I don’t want to not announce today that I’m finishing my career, probably not, but I don’t believe I’ll get to the start of the season,” Jágr, 50, said at the press conference.

“There are a lot of pros and cons here. My personality is more important in management than in hockey. On the other hand, there are some challenges that I would like to face, say goodbye with dignity, -maybe the Winter Classic, play in a new room and maybe try to score a goal after 50. We’ll see,” added the second most productive player in NHL history.

His counterpart Vejvoda, who works in Lidingö in Sweden with the Under-18 team, has been working with the team on the ice since last Wednesday. He has Burgr, who was Čermák’s assistant, and Macha, who came over from Ústí nad Labem as head coach and has been with the Knights since the start of summer training, in an equal position. After Čermák, Burger will also be a sports manager.

“I knew I would come back one day, I just didn’t know when it would be. I had the opportunity about five years ago, but at the time we were building a team from scratch in Sweden and I wanted to finish the job. I did and here I am. I can’t wait for a new challenge and to come back to Kladno after twenty-six years,” said Vejvoda, who has lived in Stockholm since 1996.

“He’s a legend, Kladeňák. We grew up together, we went to school together. He gained a lot of experience with Swedish hockey, which at one time determined the European trend. I think he will bring his experience to the team, which we will need,” Jágr said. “He himself said he wanted to come back. I don’t think it took a lot of work to persuade him, on the contrary, he wanted to be here. You can see Kladno is in his heart. His parents live here. I think he wanted to come back.” Jágr added to the transfer of the 1996 world champion from Vienna from Sweden to his native Kladno.

“I’m really looking forward to the season. To tell the truth, I didn’t even think I could ever coach Kladno. I’m enjoying it a lot and it’s a huge challenge,” said another member of the framing. trio, Mach, 52, also a former Kladno striker and protege.

Slováček, 27, left for Rauma last year in early November from České Budějovice and has scored eight points and eight assists in 29 games in the Finnish Premier League, including the qualifiers. In the extra league, the Vsetín native only played at České Budějovice Motor and collected 28 points for six goals and 22 assists in 57 duels. In the Premier League, he has a record of 108 points (26+82) in 173 games.

Cibulskis has already spent three seasons in the Czech Extraliga at Hradec Králové since 2017, then spent another season at Litvínov. He returned to Dinamo Riga last year, from where he headed to Gävle in mid-February. In the extra league, the 34-year-old, participating in eight world championships and the February Olympics in Beijing, has 201 games and 54 points for 16 goals and 38 assists. In the KHL, he had a record of 335 games and 66 points (21+45).

Sotnieks, 35, has been active in the KHL so far, where he played alongside Dinamo Riga from 2016 to 2018 for Lada Togliatti. He played a total of 680 games in 14 years in the competition and recorded 110 runs for 37 hits and 73 assists. He has already participated in 13 world championships and two Olympic tournaments.

In addition, Václav Veber, a protege from the Slavia Premier League, returns to defense and Ondřej Bláha from Ústí nad Labem to attack. Martin Procházka is from Litoměřice, who last year played three games for the Knights as an alternate start. Striker Albert Michnáč, who last played in the Slovak Extraliga in Prešov, is on trial. The arrival of goalkeeper Adam Brízgala on loan from Sparta Prague was announced earlier.