Torre Annunziata – The “Giullaresenzaradici” in the court of the armed spartans 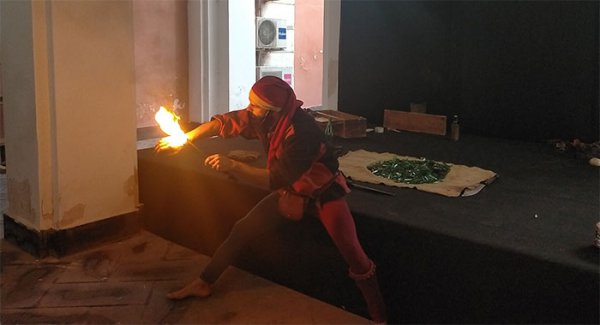 And so it happened that the scent of the Middle Ages spread to the city with its deep ancient Roman roots. Criscolo Palace turns into a medieval court and the small oplontinia Men for an afternoon.

Titsian “Giullaresenzaradici” enchants with historical representation and circus juggler. What he suggests in his show “Joker in court” is an intense journey into the expressive world of art. Magic balls balanced on the body, fakir in pieces of glass, nice firefly and funny wader.

But who is Tiziano Giullaresenzaradici and how was he born?

“I was born a theater actor, I studied for three years in Milan and then I moved to Tuscany and for a bit of fun I joined an association that travels to Europe making medieval and historical representations, hence the president’s request to create the performances and therefore the acting was no longer enough. The jester is an actor, but there is a piece of circus that, at the time, had to be created and produced. I jumped – he continues – studying jugglers and acrobatics, all self-taught. My first games as a jester were a mix of novel rhyme and improvisation rhyme, then over the years, I added the repertoire of fire, fakirs, jewelry, clowns and toured Italy for sixteen years, making mostly historical upheavals. ”

“Joker in court” is pure magic at a time when simple entertainment seems to be free only by technological means.