We don’t care about these “fans”. Slovaks face rampage of hooligans, including Czechs 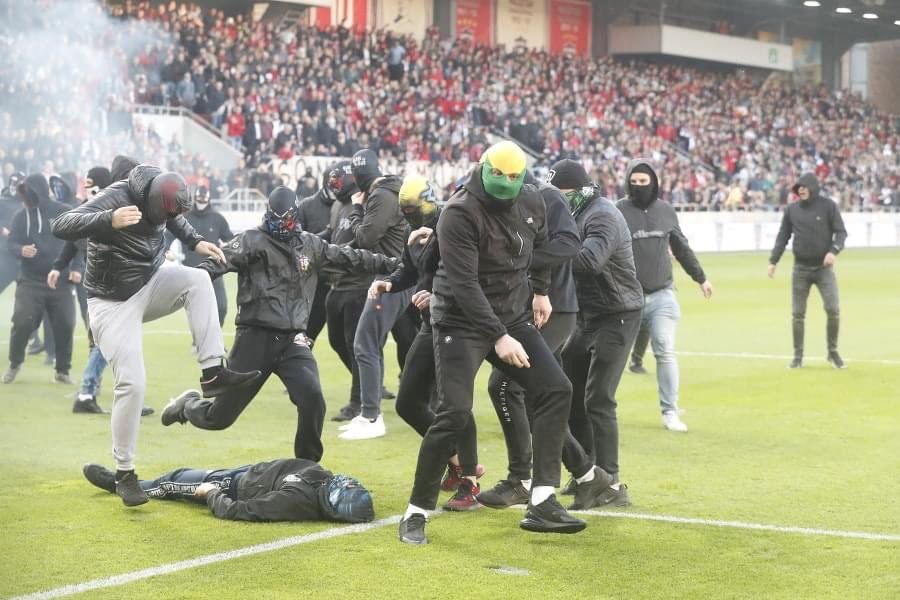 All Slovak football was eagerly awaiting the derby between Trnava and Slovan Bratislava, which was also to be a battle for first place in the championship. But because of the riots by the hooligans, which were completely out of control, only a quarter of an hour took place. Then the duel had to end because of crazy scenes on the lawn.

After ten rounds of the highest Slovak competition, Slovan Bratislava and Spartak Trnava compared to the first two places with the same number of 23 points. Sunday’s duel between traditional rivals was to be a celebration of football.

Instead, words like shame, disgrace and loss of football don’t just cross the Slovak media anymore. Only a quarter of an hour took place after the coup, after which the events in the City Arena, or Anton Malatinský stadium, were controlled by hooligans. The players had to hide in the locker room, referee Filip Glova then ended the match.

“We have seen the opposite face and very bad publicity for football. The match, which has been linked successfully all week, was ruined by the primitivism of several people,” said the former Slavic striker and shooter. Slovak national team Róbert Vittek.

“He lost football today”, he added another former national team player Marek Sapara. “How do we get people into the stadiums when this is happening? Where is the respect? We are horrified by the advertising for football,” he continued.

The introduction itself was marked by great emotions. Pyrotechnics were used in the sectors of both rock fan camps, the locals revealed a huge choreo with the inscription “Always above you, white dogs!”

However, when they got to the roof of the stadium just above the Slavic supporters, they also spread the sign there, threw smoke bombs in their club colors and allegedly also stones, the situation began to become uncontrollable. And from the stands, the center of the conflict has shifted directly to the pitch.

The supporters of the capital club reacted by launching flares, then representatives of both camps pushed the defenseless organizers and nine thousand spectators watched instead of confused football running hooligans, fist quarrels, but also digging in lying people.

“We had physiotherapist Lenka there, who sewn up Matej Čurma’s player for us. And suddenly she screams at him to run away.” describe Trnava coach Michal Gašparík. “I feel like I’m from another world, because you won’t see it anywhere else. It can’t happen in Slovakia in the 21st century,” he continued.

It was not just a question of settling scores between Trnava and Slovan. According to the Pravda.sk site and several ultras fan pages on social media, hooligans from the Czech Republic, Poland and Austria also clashed on the pitch.

Alongside Spartacus, associated groups of supporters of Baník Ostrava and the Polish GKS Katowice were to fight. Against them, along with Slovan, stood the ultras of Zbrojovka Brno, Austria Vienna or Rucha Chorzów and Wisla Cracow.

After half an hour of turmoil, the situation calmed down, the heavily dressed people evacuated the area of ​​the guest supporters, who continued to use pyrotechnics, but the Slavic footballers did not want to continue the match. Unlike the servants. At present, they are in danger of contamination for the failure of the organization. In the coming days, the Slovak Union of League Clubs will decide the fate of the match.

Slovan spoke up for his fans in an official statement. “From our point of view, this was clearly a failure of the national organizing service, which allowed the supporters of the national sector to pass in front of our supporters and then enter directly on the pitch,” said the manager. General Ivan Kmotrík Jr.

“We respect the decision to end the duel earlier. We did not want to continue after our supporters were wrongly punished and kicked out of the stadium. Without them it would not make sense to us,” he said. added.

“We are sure that neither side is innocent. We will be as cooperative as possible in the investigation and insist on punishing the perpetrators severely. Whichever club it relates to. But we do not have it. less interest in such “fans” identifying with us. They will no longer go to the stadium, “said Trnava.

The 2018 champion, of course, is working hard to ensure that the match takes place on an alternate date, without spectators. In absentia, it is mainly the players who will be beaten. “Their two-week effort was wasted by misfit fools. Without making any mistakes on the pitch,” Spartak said angrily.