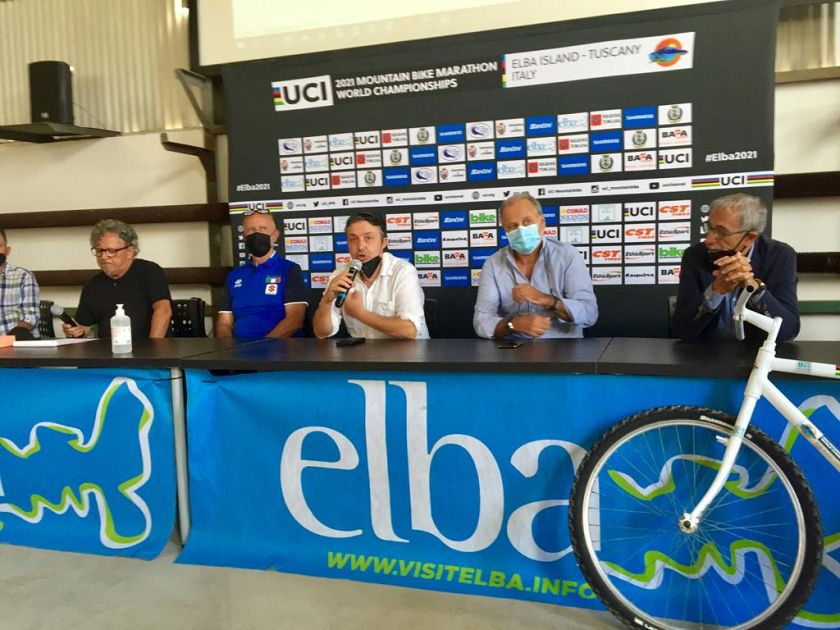 CAPOLIVERI – The presentation of the Championships took place this afternoon at the Museum of the old workshop, in the heart of the Capoliveri mines. MTB Marathon World Championships to be held in the Elban Trails on October 2nd.

As he illustrated Walter Montagna, mayor of Capoliveri, governing body of the associated management of tourism of the municipalities of Elban, this morning an organizational meeting on security was held with the prefect of Livorno and all bodies responsible for law enforcement.

The mayor then thanked the organizers of the Bike park who, with their initiatives on Mount Calamita, have managed to connect the old generations of miners with the young people of Elba who, with mountain bike trails, have highlighted a territory and the history of the community of Capoliveri and the island

Zini Angels, Mayor of Portoferraio, stressing the importance of the prestigious sporting event for the whole of Elba Island, informed that the opening ceremony of the Championships will be held in Portoferraio, on the Alto Fondale square, under the fortresses of the Medici.

Enrico Castellacci, sports councilor of the municipality of Capoliveri said: “Talking about the World Cup excites me for obvious reasons but the island of Elba, which on this occasion represents all of Italy, makes me proud”.

Also present at the press conference table Enrico Lenzi, from Elba recently reconfirmed in the role of the FCI of Component of the Off-road Commission, which hoped that after the world championship, the island of Elba will be able to organize an International Bicycle Festival

Maurizio melis, president of Asd Capoliveri Bike Park, finally illustrated the course of the race, already fully drawn, underlining how much more demanding than the other world championships organized so far. Additionally, Melis let it be known that among the most well-known athletes there will also be Leonard Paez e Nino Schurter “two living myths of mountain biking that will not fail to be exhibited on the trails of Calamita “.

The opening of the World Championship week is scheduled for Thursday September 30 with the ceremony to be held in Portoferraio with a show organized in collaboration with the Maggyart association, while on Friday October 1 in Porto Azzurro the official press conference for the presentation of the world marathon.

The races, for the men and women categories, will start from Capoliveri on the morning of Saturday 2 October. It will last around 5 hours and the bikers in the final stages will be followed live on Rai Sport and various international streaming platforms.

The bike made by Luca Polesi

In addition, for the occasion, Poste Italiane will issue a stamp with the image of the mine and the logo of the World Championships and the Elbanese artist Luca Polesi has created the work “Two wheels and a capo ….. liveri “which represents a bicycle where you can read Capoliveri.